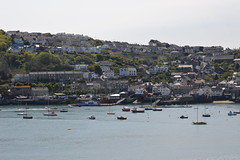 Cornwall is one of the ceremonial counties of England and these are areas to which a Lord Lieutenant is appointed. Legally, they are defined by the Lieutenancies Act 1997 as counties and areas for the purposes of the lieutenancies in England in contrast to the areas used for local government. They are also informally known as geographic counties, as often representing more permanent features of English geography, and to distinguish them from counties which have an administrative function.