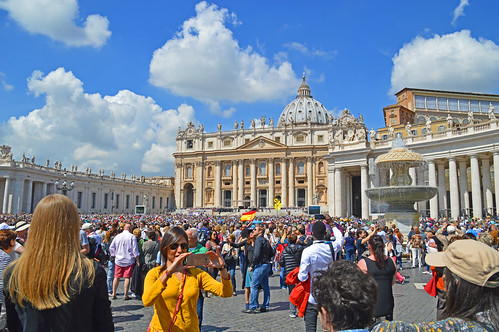 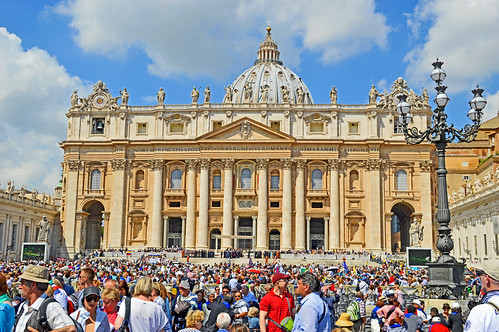 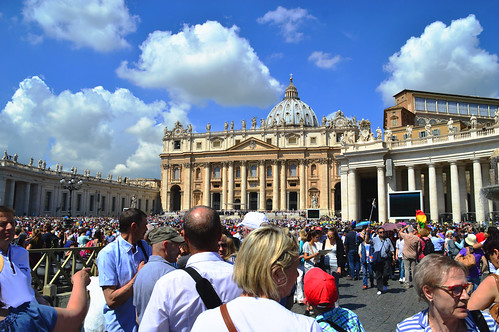 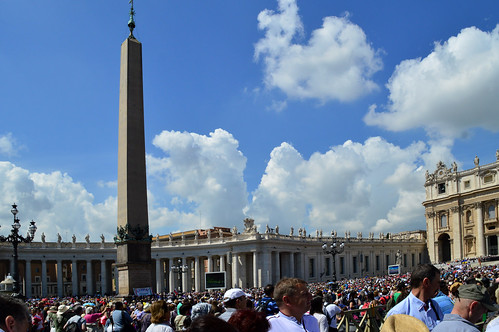 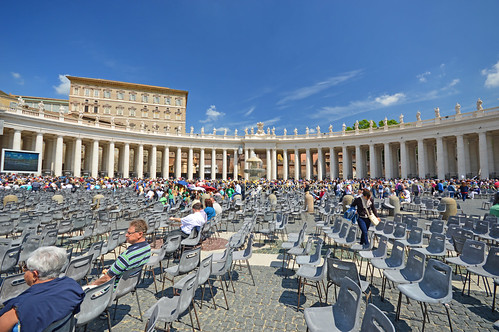 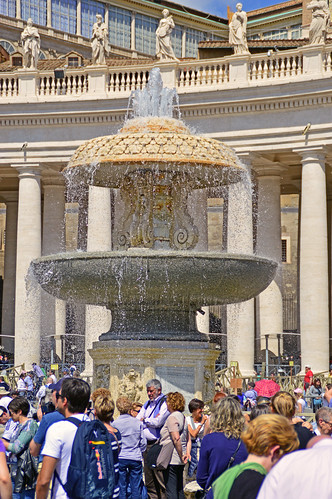 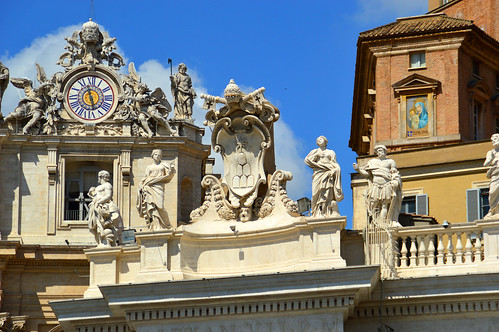 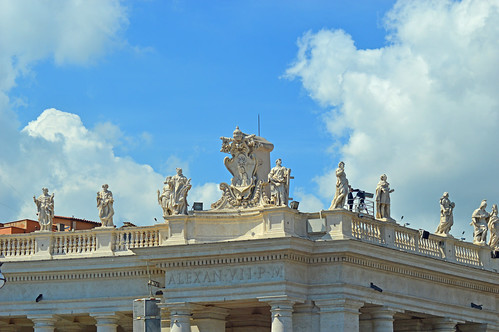 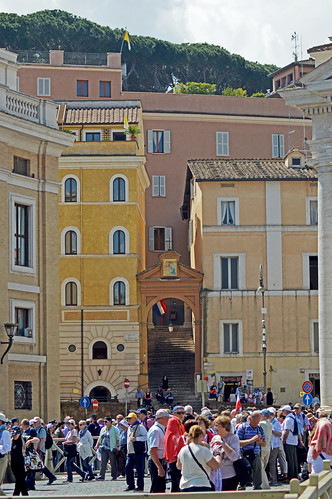 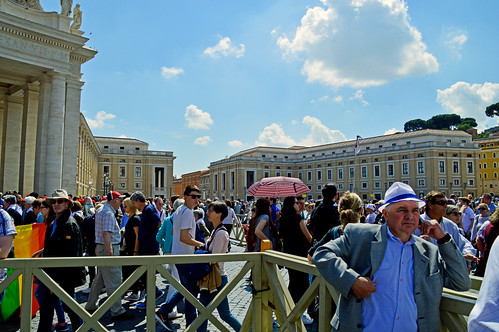 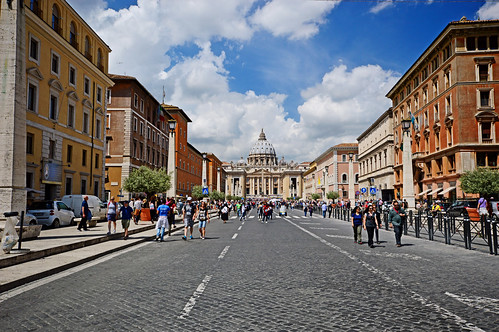 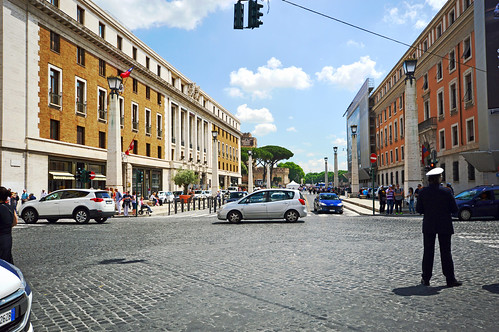 St. Peter's Square (is a large plaza located directly in front of St. Peter's Basilica in the Vatican City, the papal enclave inside Rome, directly west of the neighbourhood or rione of Borgo. Both the square and the basilica are named after Saint Peter, an apostle of Jesus and the first Catholic Pope.

At the centre of the square is an ancient Egyptian obelisk, erected at the current site in 1586. Gian Lorenzo Bernini designed the square almost 100 years later, including the massive Tuscan colonnades, four columns deep, which embrace visitors in "the maternal arms of Mother Church". A granite fountain constructed by Bernini in 1675 matches another fountain designed by Carlo Maderno in 1613.

The open space which lies before the basilica was redesigned by Gian Lorenzo Bernini from 1656 to 1667, under the direction of Pope Alexander VII, as an appropriate forecourt, designed "so that the greatest number of people could see the Pope give his blessing, either from the middle of the fa�ade of the church or from a window in the Vatican Palace". Bernini had been working on the interior of St. Peter's for decades; now he gave order to the space with his renowned colonnades, using the Tuscan form of Doric, the simplest order in the classical vocabulary, not to compete with the palace-like fa�ade by Carlo Maderno, but he employed it on an unprecedented colossal scale to suit the space and evoke a sense of awe.

The colossal Tuscan colonnades, four columns deep, frame the trapezoidal entrance to the basilica and the massive elliptical area which precedes it. The ovato tondo's long axis, parallel to the basilica's fa�ade, creates a pause in the sequence of forward movements that is characteristic of a Baroque monumental approach. The colonnades define the piazza. The elliptical center of the piazza, which contrasts with the trapezoidal entrance, encloses the visitor with "the maternal arms of Mother Church" in Bernini's expression. On the south side, the colonnades define and formalize the space, with the Barberini Gardens still rising to a skyline of umbrella pines. On the north side, the colonnade masks an assortment of Vatican structures; the upper stories of the Vatican Palace rise above.

At the center of the ovato tondo stands an uninscribed Egyptian obelisk of red granite, 25.5 m (84 ft) tall, supported on bronze lions and surmounted by the Chigi arms in bronze, in all 41 m (135 ft) to the cross on its top. The obelisk was originally erected at Heliopolis, Egypt, by an unknown pharaoh.

The Emperor Augustus had the obelisk moved to the Julian Forum of Alexandria, where it stood until AD 37, when Caligula ordered the forum demolished and the obelisk transferred to Rome. He had it placed on the spina which ran along the center of the Circus of Nero, where it would preside over Nero's countless brutal games and Christian executions.

It was moved to its current site in 1586 by the engineer-architect Domenico Fontana under the direction of Pope Sixtus V; the engineering feat of re-erecting its vast weight was memorialized in a suite of engravings. The Vatican Obelisk is the only obelisk in Rome that has not toppled since ancient Roman times. During the Middle Ages, the gilt ball on top of the obelisk was believed to contain the ashes of Julius Caesar. Fontana later removed the ancient metal ball, now in a Rome museum, that stood atop the obelisk and found only dust. Though Bernini had no influence in the erection of the obelisk, he did use it as the centerpiece of his magnificent piazza, and added the Chigi arms to the top in honor of his patron, Alexander VII. 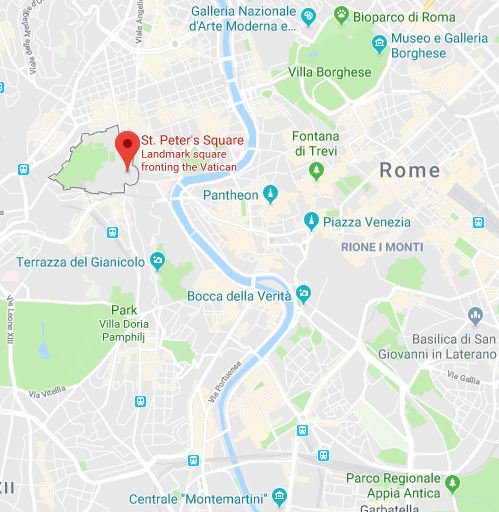