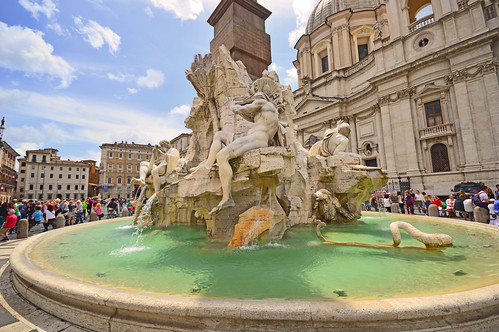 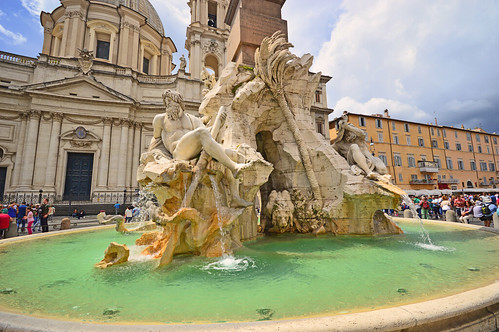 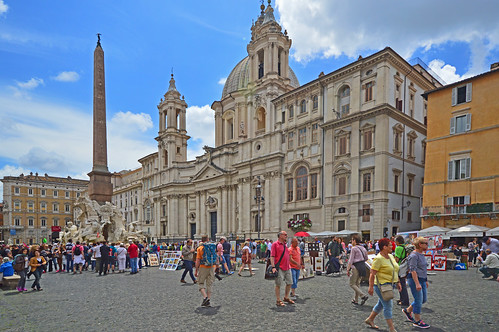 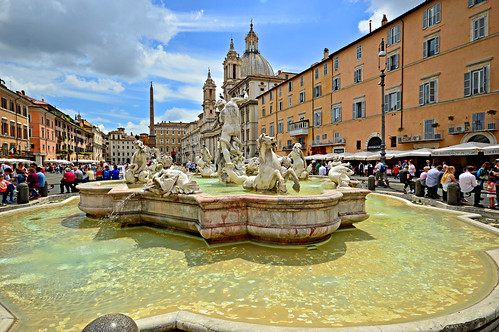 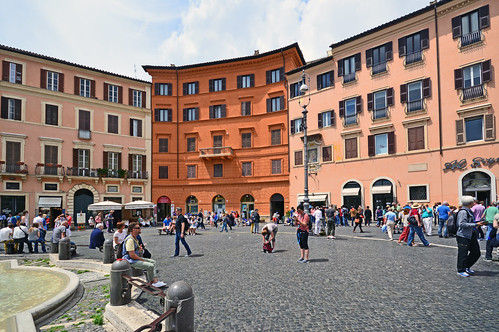 The pizza is built on the site of the Stadium of Domitian, built in the 1st century AD, and follows the form of the open space of the stadium. The ancient Romans went there to watch the agones ("games"), and hence it was known as "Circus Agonalis" ("competition arena"). It is believed that over time the name changed to in avone to navone and eventually to navona.

Defined as a public space in the last years of 15th century, when the city market was transferred there from the Campidoglio, Piazza Navona was transformed into a highly significant example of Baroque Roman architecture and art during the pontificate of Innocent X, who reigned from 1644 until 1655, and whose family palace, the Palazzo Pamphili, faced the piazza. It features important sculptural and creations: in the center stands the famous Fontana dei Quattro Fiumi or Fountain of the Four Rivers (1651) by Gian Lorenzo Bernini, topped by the Obelisk of Domitian, brought in pieces from the Circus of Maxentius; the church of Sant'Agnese in Agone by Francesco Borromini, Girolamo Rainaldi, Carlo Rainaldi and others; and the aforementioned Pamphili palace, also by Girolamo Rainaldi, that accommodates the long gallery designed by Borromini and frescoed by Pietro da Cortona.

Piazza Navona has two other fountains. At the southern end is the Fontana del Moro with a basin and four Tritons sculpted by Giacomo della Porta (1575) to which, in 1673, Bernini added a statue of a Moor, wrestling with a dolphin. At the northern end is the Fountain of Neptune (1574) also created by Giacomo della Porta; the statue of Neptune, by Antonio Della Bitta, was added in 1878 to create a balance with La Fontana del Moro.

During its history, the piazza has hosted theatrical events and other ephemeral activities. From 1652 until 1866, when the festival was suppressed, it was flooded on every Saturday and Sunday in August in elaborate celebrations of the Pamphilj family. The pavement level was raised in the 19th century, and in 1869 the market was moved to the nearby Campo de' Fiori. A Christmas market is held in the piazza square.

The base of the fountain is a basin from the centre of which travertine rocks rise to support four river gods and above them, an ancient Egyptian obelisk surmounted with the Pamphili family emblem of a dove with an olive twig. Collectively, they represent four major rivers of the four continents through which papal authority had spread: the Nile representing Africa, the Danube representing Europe, the Ganges representing Asia, and the Río de la Plata representing the Americas.

Public fountains in Rome served multiple purposes: first, they were highly needed sources of water for neighbors in the centuries prior to home plumbing. Second, they were monuments to the papal patrons. Earlier Bernini fountains had been the Fountain of the Triton in Piazza Barberini, the Fountain of the Moor in the southern end of Piazza Navona erected during the Barberini papacy, and the Neptune and Triton for Villa Peretti Montalto, whose statuary now resides at Victoria and Albert Museum in London.

Each has animals and plants that further carry forth identification, and each carries a certain number of allegories and metaphors with it. The Ganges carries a long oar, representing the river's navigability. The Nile's head is draped with a loose piece of cloth, meaning that no one at that time knew exactly where the Nile's source was. The Danube touches the Pope's personal coat of arms, since it is the large river closest to Rome. And the Río de la Plata is sitting on a pile of coins, a symbol of the riches America could offer to Europe (the word plata means "silver" in Spanish). Also, the Río de la Plata looks scared by a snake, showing rich men's fear that their money could be stolen. Each is a river god, semi-prostrate, in awe of the central tower, epitomized by the slender Egyptian obelisk, symbolizing by Papal power surmounted by the Pamphili symbol (dove). In addition, the fountain is a theater in the round, a spectacle of action, that can be strolled around. Water flows and splashes from a jagged and pierced mountainous disorder of travertine marble. A legend, common with tour-guides, is that Bernini positioned the cowering Rio de la Plata River as if the sculpture was fearing the facade of the church of Sant'Agnese by his rival Borromini could crumble against him; in fact, the fountain was completed several years before Borromini began work on the church

The obelisk, made of Aswan granite, has an interesting history. It is connected with the emperor Domitian, and was originally thought to have come from the Serapeum, which the emperor rebuilt in A.D. 80. However, it is equally plausible that the obelisk might have originated from the Temple of the Gens Flavia on the Quirinal Hill, built by Domitian dedicated to his family cult. The hieroglyphic inscriptions on the obelisk were of Roman authorship, offering a hymn to Domitian, and the deified emperors Vespasian and Titus, possibly on the occasion of something being restored. In the fourth century, the obelisk was relocated to the Circus of the emperor Maxentius, located between the Church of St. Sebastian and the tomb of Cecilia Metella along the Appian Way, where it was found and moved to the Fountain. The circus as well as the nearby villa and mausoleum was first believed to be attributed to the emperor Caracalla, until excavations carried out by Antonio Nibby in 1825, in which an inscription identifying the ownership of the site was found.[

The Fountain of Neptune (Italian: Fontana del Nettuno) is a fountain in Rome, Italy, located at the north end of the Piazza Navona. It was once called "Fontana dei Calderari" because it was located close to a small alley with blacksmith's workshops, makers of pots and pans and of other metal based businesses, all of them generating heat.

The restoration of the Roman Aqua Virgo aqueduct in 1570 was immediately followed by the start of work on a continuation water supply pipe towards the district of the old Campo Marzio, which following the diminution of the city's size and importance was left as the most densely populated part of the city. Restoration of a piped water supply in turn permitted the construction of several public fountains. The basin of the Fontana del Nettuno, (without the sculptures), was designed in 1574 by Giacomo Della Porta, who was also responsible for the Moor Fountain at the other side of the square. It was sponsored by pope Gregory XIII. The lower part of the basin consists of white marble and the upper part of the local stone from Pietrasanta. For the next 300 years, the fountain survived without statues.

The fountain as it exists today was finally completed in 1878 by Antonio della Bitta, who added the imposing sculpture of "Neptune fighting with an octopus", and Gregorio Zappalá, who created the other sculptures, based on the mythological theme of the "Nereids with cupids and walruses".[2] This statuary was added following a competition in 1873, in order to balance that of the Moor Fountain on the south side of the piazza and of the Fontana dei Quattro Fiumi (Fountain of the Four Rivers) at its centre.