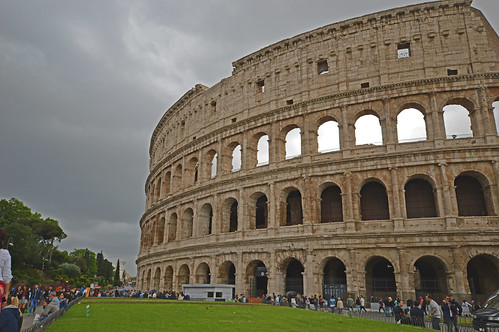 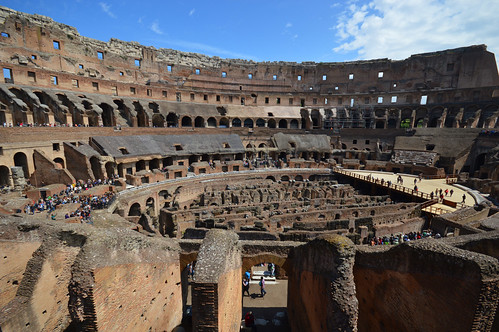 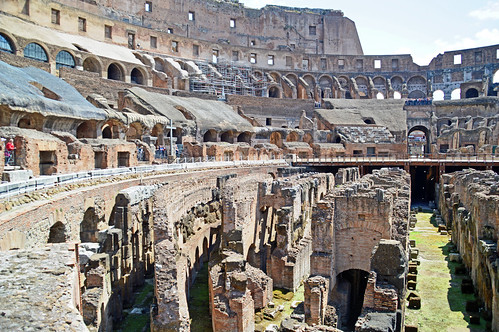 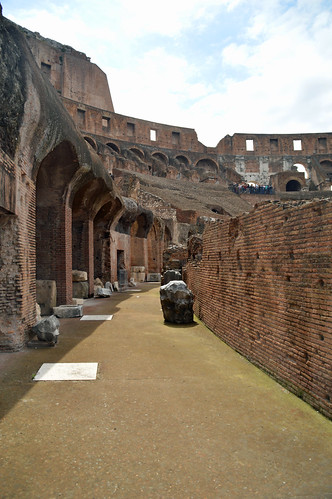 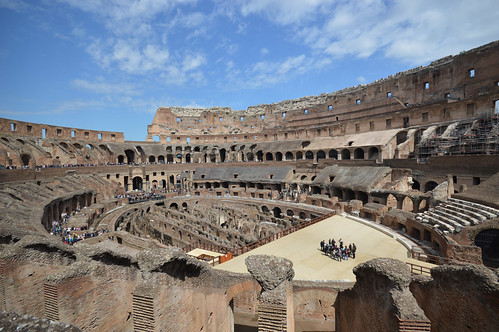 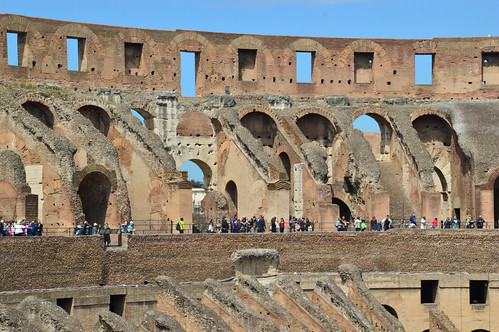 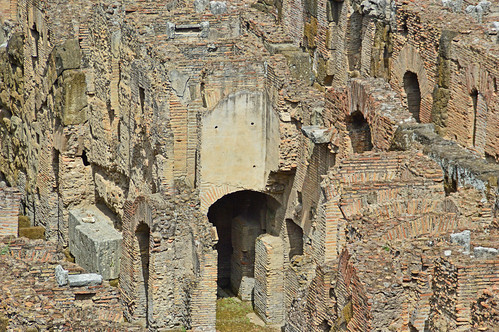 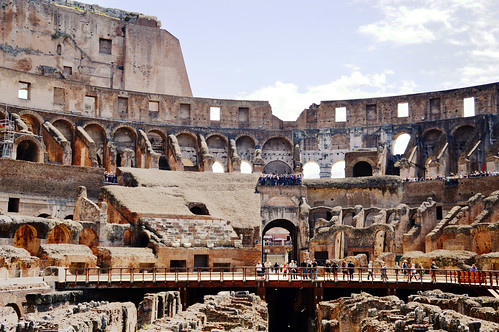 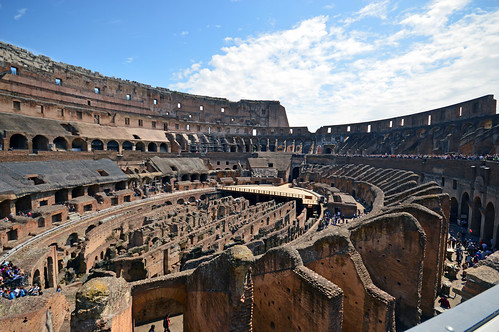 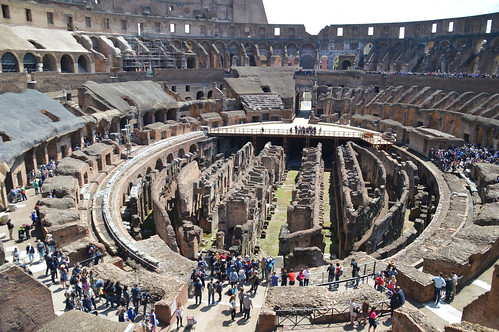 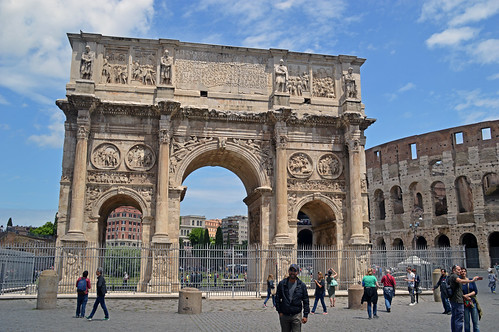 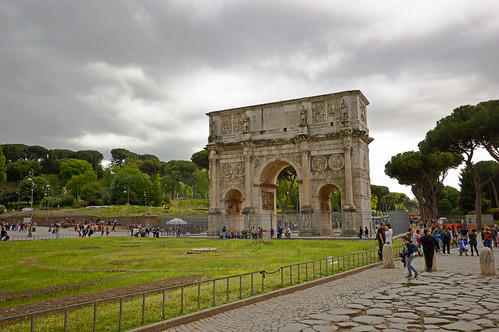 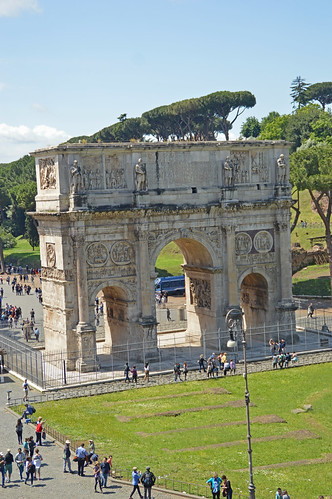 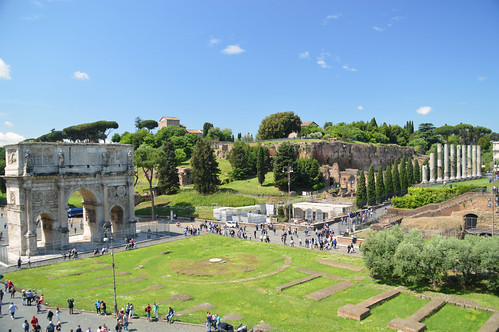 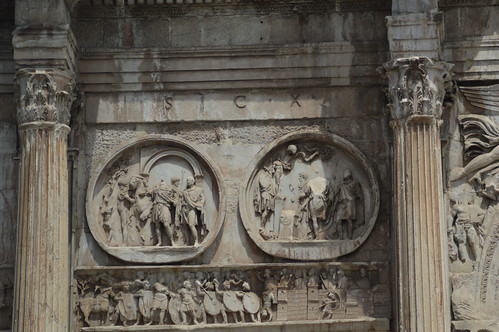 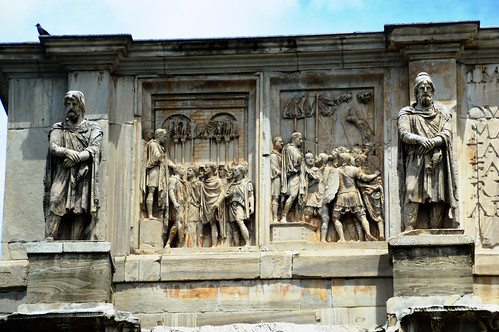 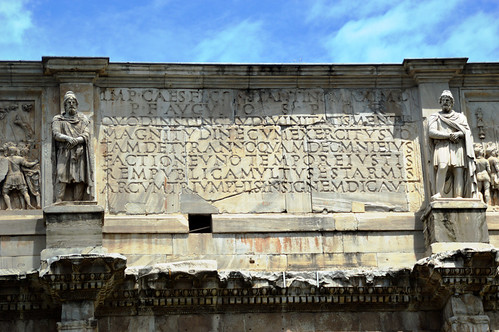 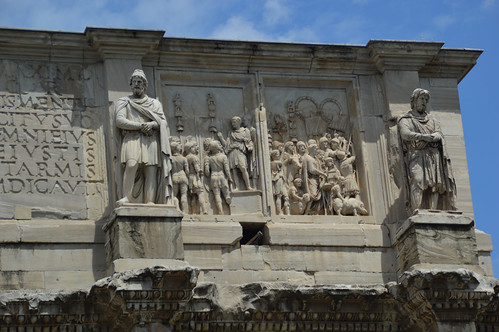 The Colosseum or Coliseum, also known as the Flavian Amphitheatre or Colosseo, is an oval amphitheatre in the centre of the city of Rome, Italy. Built of travertine, tuff, and brick-faced concrete, it is the largest amphitheatre ever built. The Colosseum is situated just east of the Roman Forum. Construction began under the emperor Vespasian in AD 72, and was completed in AD 80 under his successor and heir Titus. Further modifications were made during the reign of Domitian (81-96). These three emperors are known as the Flavian dynasty, and the amphitheatre was named in Latin for its association with their family name (Flavius).

The Colosseum could hold, it is estimated, between 50,000 and 80,000 spectators, having an average audience of some 65,000; it was used for gladiatorial contests and public spectacles such as mock sea battles (for only a short time as the hypogeum was soon filled in with mechanisms to support the other activities), animal hunts, executions, re-enactments of famous battles, and dramas based on Classical mythology. The building ceased to be used for entertainment in the early medieval era. It was later reused for such purposes as housing, workshops, quarters for a religious order, a fortress, a quarry, and a Christian shrine.

The site chosen was a flat area on the floor of a low valley between the Caelian, Esquiline and Palatine Hills, through which a canalised stream ran. By the 2nd century BC the area was densely inhabited. It was devastated by the Great Fire of Rome in AD 64, following which Nero seized much of the area to add to his personal domain. He built the grandiose Domus Aurea on the site, in front of which he created an artificial lake surrounded by pavilions, gardens and porticoes. The existing Aqua Claudia aqueduct was extended to supply water to the area and the gigantic bronze Colossus of Nero was set up nearby at the entrance to the Domus Aurea.

Construction was funded by the opulent spoils taken from the Jewish Temple after the Great Jewish Revolt in 70 AD led to the Siege of Jerusalem. According to a reconstructed inscription found on the site, "the emperor Vespasian ordered this new amphitheatre to be erected from his general's share of the booty." Along with the spoils, estimated 100,000 Jewish prisoners were brought back to Rome after the war, and many contributed to the massive workforce needed for construction. The slaves undertook manual labor such as working in the quarries at Tivoli where the travertine was quarried, along with lifting and transporting the quarried stones 20 miles from Tivoli to Rome. Along with this free source of unskilled labor, teams of professional Roman builders, engineers, artists, painters and decorators undertook the more specialized tasks necessary for building the Colosseum.

Construction of the Colosseum began under the rule of Vespasian in around 70-72 AD (73-75 AD according to some sources) The Colosseum had been completed up to the third story by the time of Vespasian's death in 79. The top level was finished by his son, Titus, in 80, and the inaugural games were held in A.D. 80 or 81. Dio Cassius recounts that over 9,000 wild animals were killed during the inaugural games of the amphitheatre. Commemorative coinage was issued celebrating the inauguration. The building was remodelled further under Vespasian's younger son, the newly designated Emperor Domitian, who constructed the hypogeum, a series of underground tunnels used to house animals and slaves. He also added a gallery to the top of the Colosseum to increase its seating capacity.

The arena itself was 83 meters by 48 meters (272 ft by 157 ft / 280 by 163 Roman feet).[15] It comprised a wooden floor covered by sand (the Latin word for sand is harena or arena), covering an elaborate underground structure called the hypogeum (literally meaning "underground"). The hypogeum was not part of the original construction but was ordered to be built by Emperor Domitian. Little now remains of the original arena floor, but the hypogeum is still clearly visible. It consisted of a two-level subterranean network of tunnels and cages beneath the arena where gladiators and animals were held before contests began. Eighty vertical shafts provided instant access to the arena for caged animals and scenery pieces concealed underneath; larger hinged platforms, called hegmata, provided access for elephants and the like. It was restructured on numerous occasions; at least twelve different phases of construction can be seen.

The hypogeum was connected by underground tunnels to a number of points outside the Colosseum. Animals and performers were brought through the tunnel from nearby stables, with the gladiators' barracks at the Ludus Magnus to the east also being connected by tunnels. Separate tunnels were provided for the Emperor and the Vestal Virgins to permit them to enter and exit the Colosseum without needing to pass through the crowds.

Substantial quantities of machinery also existed in the hypogeum. Elevators and pulleys raised and lowered scenery and props, as well as lifting caged animals to the surface for release. There is evidence for the existence of major hydraulic mechanisms and according to ancient accounts, it was possible to flood the arena rapidly, presumably via a connection to a nearby aqueduct. However, the construction of the hypogeum at Domitian's behest put an end to the practise of flooding, and thus also to naval battles, early in the Colosseum's existence.

The Arch of Constantine is a triumphal arch in Rome, situated between the Colosseum and the Palatine Hill. It was erected by the Roman Senate to commemorate Constantine I's victory over Maxentius at the Battle of Milvian Bridge in 312.[a] Dedicated in 315, it is the largest Roman triumphal arch. The arch spans the Via triumphalis, the way taken by the emperors when they entered the city in triumph.

Though dedicated to Constantine, much of the decorative material incorporated earlier work from the time of the emperors Trajan (98�117), Hadrian (117�138) and Marcus Aurelius (161�180), and is thus a collage. The last of the existing triumphal arches in Rome, it is also the only one to make extensive use of spolia, reusing several major reliefs from 2nd century imperial monuments, which give a striking and famous stylistic contrast to the sculpture newly created for the arch. This earned it the derisive nickname of Cornacchia di Esopo Aesop's Crow.

The arch is 21 m high, 25.9 m wide and 7.4 m deep. It has three archways, the central one being 11.5 m high and 6.5 m wide and the lateral archways 7.4 m by 3.4 m each. Above the archways is placed the attic, composed of brickwork reveted (faced) with marble. A staircase within the arch is entered from a door at some height from the ground, on the west side, facing the Palatine Hill. The general design with a main part structured by detached columns and an attic with the main inscription above is modelled after the example of the Arch of Septimius Severus on the Roman Forum.

The arch is heavily decorated with parts of older monuments, which assume a new meaning in the context of the Constantinian building. As it celebrates the victory of Constantine, the new "historic" friezes illustrating his campaign in Italy convey the central meaning: the praise of the emperor, both in battle and in his civilian duties. The other imagery supports this purpose: decoration taken from the "golden times" of the Empire under the 2nd century emperors whose reliefs were re-used places Constantine next to these "good emperors", and the content of the pieces evokes images of the victorious and pious ruler. 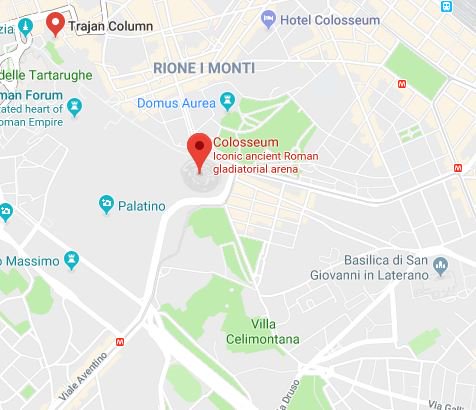