Most tourists are unaware of the Basilica di San Giovanni on the other side of Rome from the Vatican, and would probably be surprised to learn that this Basilica ranks above all other churches in the Roman Catholic Church, even above St Peter's Basilica in the Vatican.

The Basilica of St John Lateran (Basilica di San Giovanni in Laterano) is the cathedral church of Rome and the official seat of the Bishop of Rome, who is the Pope.

As such the Basilica contains the papal throne, although the pope rarely visits and lives over at the Vatican.

There is plenty to admire at the Basilica di San Giovanni. Most tourists visit partly to see the Altar of the Holy Sacrament; here you will see the cedar table that is said to be the one used by Christ at the Last Supper.

The basilica has been revamped several times, most notably by Borromini in the 17th century, and by Alessandro Galilei, who added the immense white facade in 1735.

This towering structure, surmounted by 15 7m-high statues – Christ, St John the Baptist, John the Evangelist and the 12 Apostles – is an imposing example of late-baroque classicism. The central bronze doors in the porch were moved here from the Curia in the Roman Forum, while, on the far right, the Holy Door is only opened in Jubilee years.

The cavernous interior owes much of its present look to Francesco Borromini, who refurbished it for the 1650 Jubilee. It’s a breathtaking sight with a golden gilt ceiling, a 15th-century mosaic floor, and a wide central nave lined with muscular 4.6m-high sculptures of the apostles.

At the head of the nave, the Gothic baldachin over the papal altar is said to contain the relics of the heads of saints Peter and Paul. In front, a double staircase leads down to the confessio where you'll see a wooden statue of St John the Baptist and the Renaissance tomb of Pope Martin V.

Behind the altar, the massive apse is decorated with sparkling mosaics. Parts of these date from the 4th century, but most were added in the 1800s. To the right of the apse, through a small gift shop, the Museo del Tesoro contains a small collection of religious artefacts and vestments.

At the other end of the basilica, on the first pillar in the right-hand aisle, is an incomplete Giotto fresco. While admiring this, cock your ear towards the next column, where a monument to Pope Sylvester II (r 999–1003) is said to sweat and creak when the death of a pope is imminent.

Outside the church, the beautiful 13th-century cloister, accessible to the left of the altar, is a lovely, peaceful place with graceful twisted columns set around a central garden. 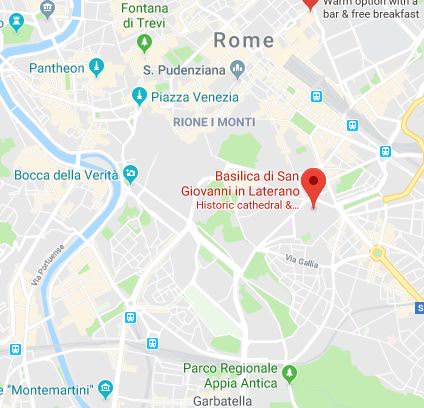